“What then should we do?”

“The cost of the three recommended measures pales in comparison to the price the world will pay if we fail to act now.” This statement follows three recommendations made in a report from a group of scientists organized by the Pontifical Academy of Sciences at the Vatican. They met in April to discuss the causes and consequences of the retreat of mountain glaciers, and to prepare a report for the Vatican, Fate of Mountain Glaciers in the Anthropocene, about their conclusions.

The Scripps Institute of Oceanography, to which four of the scientists are connected, points out in their press release about the report that it’s unusual for scientists to propose actions to respond to the situations they describe in this sort of report, but that panel co-chair Veerabhadran Ramanathan said that “the circumstances warranted” doing so in this case. The three recommendations are immediate reduction of CO2 emissions “using all means possible”; reducing the amount of “warming air pollutants” (dark soot, methane, lower atmosphere ozone, and hydrofluorocarbons) by up to 50%; and preparing to adapt to both chronic and abrupt climate changes.

Yesterday’s post on this blog, “What then should we do?”, asked what we should do in response to our increasing understanding of the changes we face on our planet. This report to the Vatican begins with a Declaration by the Working Group that ends with these words:

We are committed to ensuring that all inhabitants of this planet receive their daily bread, fresh air to breathe and clean water to drink as we are aware that, if we want justice and peace, we must protect the habitat that sustains us. The believers among us ask God to grant us this wish.

That commitment itself suggests another way of answering the question “What then should we do?” And the plain statement that the cost of not carrying out these recommendations far exceeds the cost of doing what we need to do now tells us that now is when we should start doing whatever it takes to maintain a sustainable environment for all of God’s children.

What Then Should We Do?

“What then should we do?” is the question the crowds ask John the Baptist in today’s Gospel lesson (Luke 3:1-14) for the Daily Office lectionary. John the Baptist is preaching about “the wrath to come”, a time of judgment, and tells the crowd that who they are or who their ancestors were won’t make any difference. Instead, they need to “bear fruits worthy of repentance”. 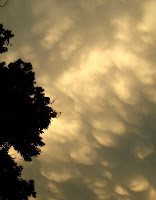 "What then should we do?" What does it look like to bear fruits worthy of repentance? John’s answer seems a little surprising, given John’s dramatic description of the coming time and the crowd’s apprehension. He tells them to do some fairly simple things: If you have extra clothing or food, share it with those in need. Tax collectors should collect no more than the prescribed amount. Soldiers shouldn’t use their power to extort money, but instead be satisfied with the money they are paid. Repentance, true sorrow for sins and an effort to live a better life, doesn’t have to be something dramatic or showy. It’s evidenced in daily behavior, in basic moral decency. It’s shown in caring for the poor, in everyday honesty, in using one’s power for good.

Instead of being proclaimed by a modern-day John the Baptist with apocalyptic imagery, a news story about the most recent scientific findings concerning climate change and sea level rise has been buried in the news this week. The Arctic Monitoring and Assessment Program (AMAP) has released a summary of a full report that will be delivered to the foreign ministers of the eight Arctic nations next week; the Associated Press first reported on the summary on Tuesday of this week (see New report confirms Arctic melt accelerating ).

Three to Five Foot Rise in Sea Level by 2100

A prediction of sea level rise in this century made by the United Nation’s panel on climate change in 2007 predicted a sea level rise of 7 to 23 inches by 2100. That prediction did not take into account the dynamics of ice melting in the Arctic and Antarctica; research since that time makes it possible to include those dynamics in this new estimate. The new prediction is that sea levels will rise anywhere from 35 to 63 inches by 2100 – in the next 89 years. A baby born today may very well see great changes in geography through sea level rise alone, apart from other factors related to climate change.

The sorts of feedback mechanisms that scientists had predicted we would see as the Arctic ice started melting have now started to kick in. The report says that temperatures in the Arctic region the past six years were the highest ever recorded since measurements began in 1880. That means that even if carbon emissions were cut drastically tomorrow, some of the heating and melting would continue. We are no longer talking about preventing the melting of the Arctic ice cap and a consequent rise in sea level; we are talking about mitigation, about keeping the rise in both temperature and sea level rise as low as possible given where we are now.

What then should we do?

As we think about these comparatively rapid changes in our world and about the consequences for people and communities in coastal regions, we might very well ask the question the crowds asked John the Baptist: What then should we do?

There are several books that address that question in some depth. Two that I can recommend are Down to the Wire: Confronting Climate Collapse by David W. Orr and Eaarth by Bill McKibben. Both acknowledge that our planet has already been changed in ways that will not be reversed, but both also describe with hope ways to adapt to our changing planet and mitigate the effects of climate change.

My guess is that John the Baptist’s way of answering the same question points toward the way we might best answer it. While the more dramatic, large-scale underpinnings for our response to climate change will need to come from government and corporations, the lasting changes will come from our daily actions. As we come to understand that basic moral decency in this century includes weighing the environmental consequences of our everyday actions, the choices we must make will become clearer.

Those simple things we all know we should do – turning off lights when we leave a room, growing some of our own food and/or buying locally produced food, planning our errands to minimize driving, using alternatives like walking, biking, or public transportation where possible – aren’t very glamorous. They make a difference, though, not only in carbon emissions, but in the way we think about our relationship to the earth. As we consciously change our actions, we become more aware of our relationship to the earth; and as we become more aware of our relationship to the earth, the easier it is to see and accept the changes we must make if we are to preserve a sustainable environment for ourselves and for those who will be alive at the next turn of the century.

What then should we do? Be awake and aware. Find out what is happening, even if the news about climate change isn’t on the front page of the newspaper. Do the simple things we know can make a difference, and actively seek other things we can do. Advocate for policy changes in government and industry. Pray for the earth and pray for wisdom and guidance for ourselves and our leaders.

Or, as John the Baptist says, “Bear fruits worthy of repentance.”

The purpose of this blog is to help people in faith communities, especially the Christian community, be more aware of the connections between our religious traditions and what is happening in the world around us in the category of “environmental issues”. My tradition is Episcopalian; so many posts are informed by the Revised Common Lectionary, the Book of Common Prayer, and the interplay between the liturgical seasons and the seasons of the natural world.

Environmental issues aren't bound by political or ecclesiastical borders. I live in south central Nebraska, where a connection to the land is still part of everyday life for most people. I still have a close connection to the woodlands of Ohio's Cuyahoga Valley, my first eco-location, and when I travel I am curious about what we can learn about ecology and environmentalism from other places. Friends and people who care about the environment from all over the world help us know what is happening in other places. All of us on this planet are connected in ways we are just beginning to realize, and these connections help us think better about caring for and appreciating God’s creation.

Betsy Blake Bennett
I’m a deacon in the Diocese of Nebraska, where I serve as Archdeacon. The focus of my diaconal ministry is the environment: creation care, environmental justice, and the way we connect with God through God’s creation.I believe that faith communities bring an important voice of hope into discussions about the environment. I completed the GreenFaith Fellowship Program in religious environmental leadership in 2008. My academic background is in philosophy, and I have training in spiritual direction. I’m available to visit parishes in the diocese that want to look at environmental issues from a faith perspective, and I’m always looking for more Nebraska Episcopalians who feel called to be part of this work on the diocesan level.